Like other Mayan peoples, the Ch’orti’ have a special relationship with the land. Their conception of the territory includes the land, the rocks, the forests and the rivers. The Río Grande de Jocotán, or Jupilingo (as it is known by the people from the area) crosses the ancestral Ch’orti’ lands located in Honduras and Chiquimula, Guatemala. The presence of this river in this region is considered to be miraculous by the Ch’ortí’ population, as Chiquimula forms part of the region known as the “Dry Corridor”, where water and vegetation are scarce. Agriculture is the main livelihood of the Ch’orti’ community. They grow essential products such beans and corn, which are vulnerable to the frequent droughts experienced in the region. The Ch’orti’, like other ancestral peoples of Guatemala, are governed by an indigenous council chosen by the community.

Area of ​​work and rights defended

CCCND’s main task is to train and inform the Ch’orti’communities on issues related to the peasant economy, the environment, rights and territory. They offer legal advice to communities seeking formal recognition of their status as Maya Ch'ortí indigenous people.

Description of the problem

The CCCND accompanies 43 Ch'ortí communities in the region, representing 7,000-8,000 families and, since October 2018, they have formed part of the Iximulew Peasant Front. Their work revolves around the defense of the territory, and their main concerns and actions focus on the impacts of extractive projects on the environment and local economies.

During the second half of 2019 and in 2020, a very notable rise in conflict and a systematic increase in attacks against members of the organization was observed. Their security situation is very worrying, particularly in the communities of Lela Obraje and Olopa. Systematic attacks such as direct threats, defamation and intimidation have escalated sharply from 2018 to the present day.

PBI has been accompanying the CCCND since 2009 and has intensified its presence in their member communities, especially those that are seeking to be recognized as indigenous communities against local municipalities and the Guatemalan State. 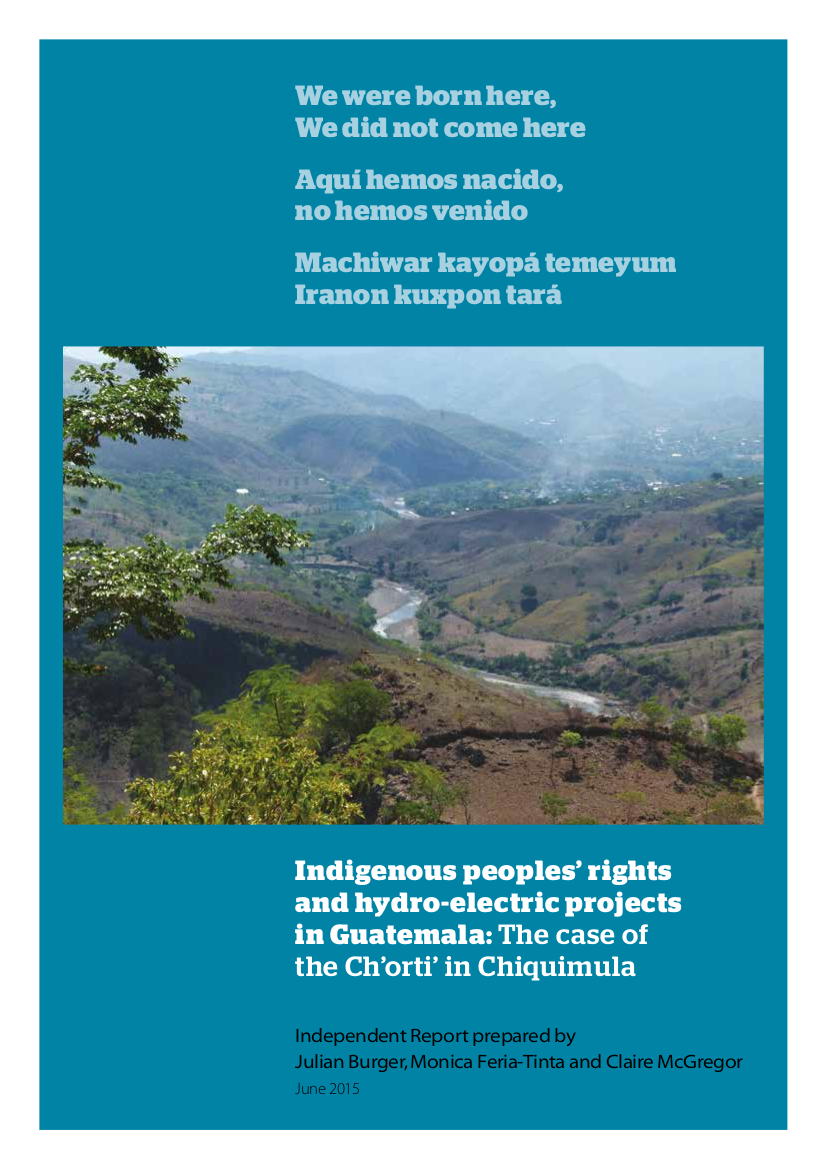 Indigenous Peoples' Rights and Hydroelectric Projects in Guatemala: The Case of the Ch'orti' in Chiquimula (November 2015)

In May of 2015, CCCND invited an independent delegation - composed by human rights professor Julian Burger and the barristers Mónica Feria-Tinta and Claire McGregor, all experts on the rights of Indigenous Peoples - to review the human rights impacts of the two proposed hydro-electric dams on the Maya Ch’orti’ communities and in so doing meet with and received information from all parties and interests. This has included a wide range of community members, local and national representatives of the hydro-electric company, local and national government officials, actors of civil society and international diplomacy. This report contains findings and recomendaciones.